I made the Mantle of Efrideet with the Iron Pledge ornament for a commission. This is a cape and hood with a samurai like design on top of the hood which presented a unique challenge. It’s for those who want to wear a helmet on top of a hood on top of another helmet. 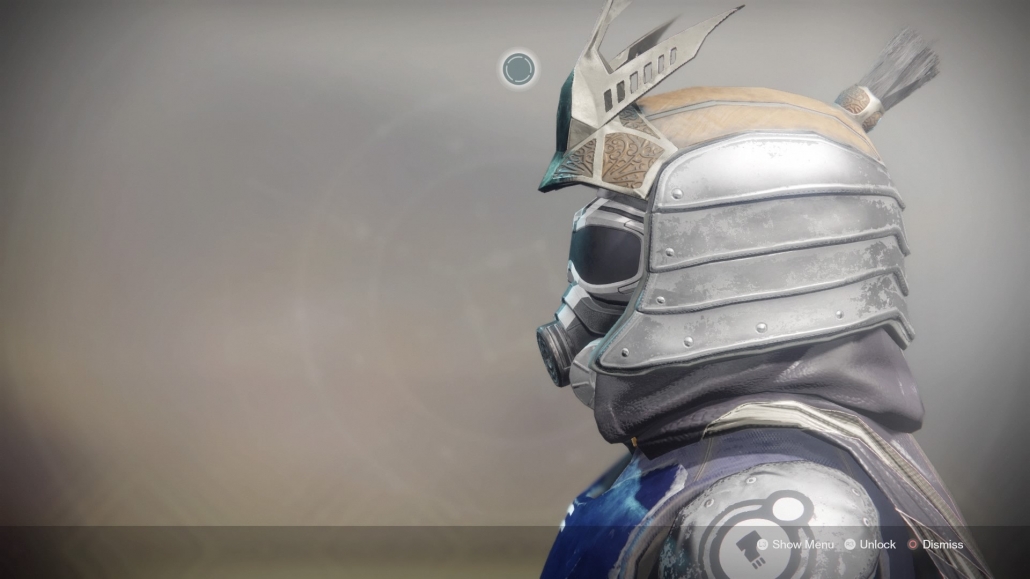 I started out with the cape, I wanted to use one piece of the dark grey fabric and layer the shiny costume satin on both sides. I knew it was going to be important to make two perfectly symmetrical pieces of the costume satin so that the edges would line up when I would go over the edges with a tight zigzag stitch to finish the raw edges on both sides at the same time. 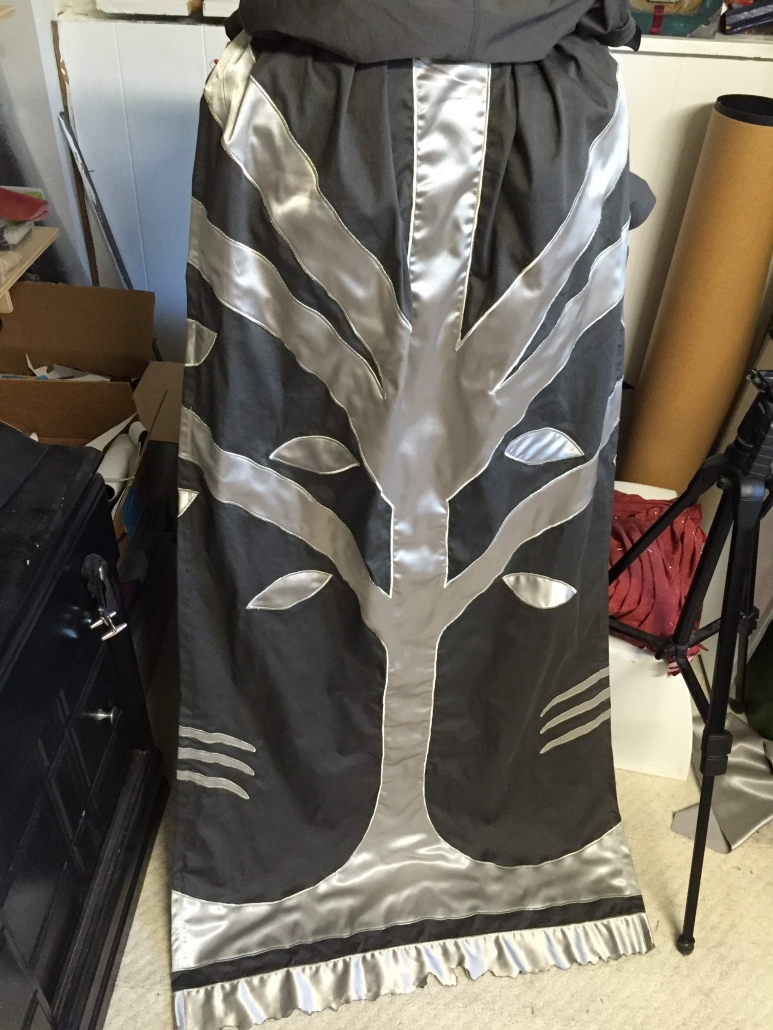 I freehanded the design by drawing on the wrong side of the fabric (then flipped it over to have a second try), and cut out all of my pieces, and pinned the costume satin pieces on each side of the dark grey base. I used a simple straight stitch to get everything together before finishing all of the edges. I could trim the edges or edge of one side of the costume satin to make them closer so that my zigzag stitch could enclose both raw edges. This was tedious and took me 2 days of sewing to do but in the end only about 4 inches (of probably several yards of edge) got missed on the back side. I hit those edges with a “stop fray” clear glue and left them alone to keep the top of the cloak neat.

Unfortunately my free-handed design was not correctly proportional, I should have had Rock make me a pattern digitally. And despite my efforts to prevent the wiggles in the fabric as I sewed the satin down, it was still quite wiggly and not as smooth as I would like. I could have used something like heat and bond to fuse the satin to the polyester blend first to achieve a cleaner look.

The hood I modified from one of my favorite patterns I made the previous year. I determined approximately how much larger it had to be to fit on top of a helmet by placing my pattern over an example helmet. I cut my fabric for the pattern and pinned it then placed it back over my helmet to adjust the placement of my pins to better fit the rounded back of a helmet.

I made a lining using my new shaped pattern with black knit so the weight would help pull the hood down and sewed my two hoods together using a double fold hem on the edge around the face so the grey fabric continued slightly on the inner side.

With the shape of the hood matching the helmet, I could make the pattern for the samurai style pieces on top of the hood. The hood needed to remain flexible so that it could fold down when not worn but stiff enough that it would hold its shape when up, so I decided to use a material I’m familiar with: upholstery vinyl. I used some scrap fabric to make my patterns and cut out the pieces in light grey marine vinyl. One layer of vinyl wasn’t thick enough so I doubled up the four layered pieces. 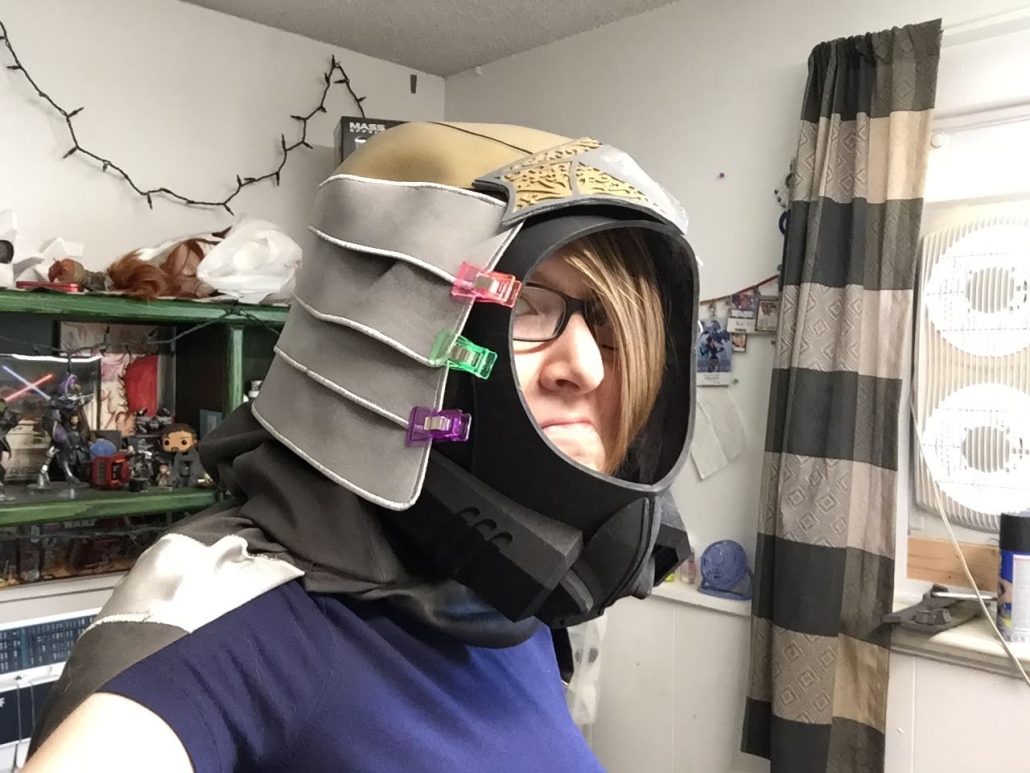 The decorative piece in the front was made with a layer of foam, a layer of vinyl, and another layer of vinyl that had the detail cut out. The design was freehand drawn on the top of the vinyl and cut with a sharp hobby knife. Another time consuming process (2-3 hours) that would have gone much faster and cleaner with a laser cutter. A similar process was used for the holder for the hair piece except I left out the middle layer of vinyl to cut down on the bulk. 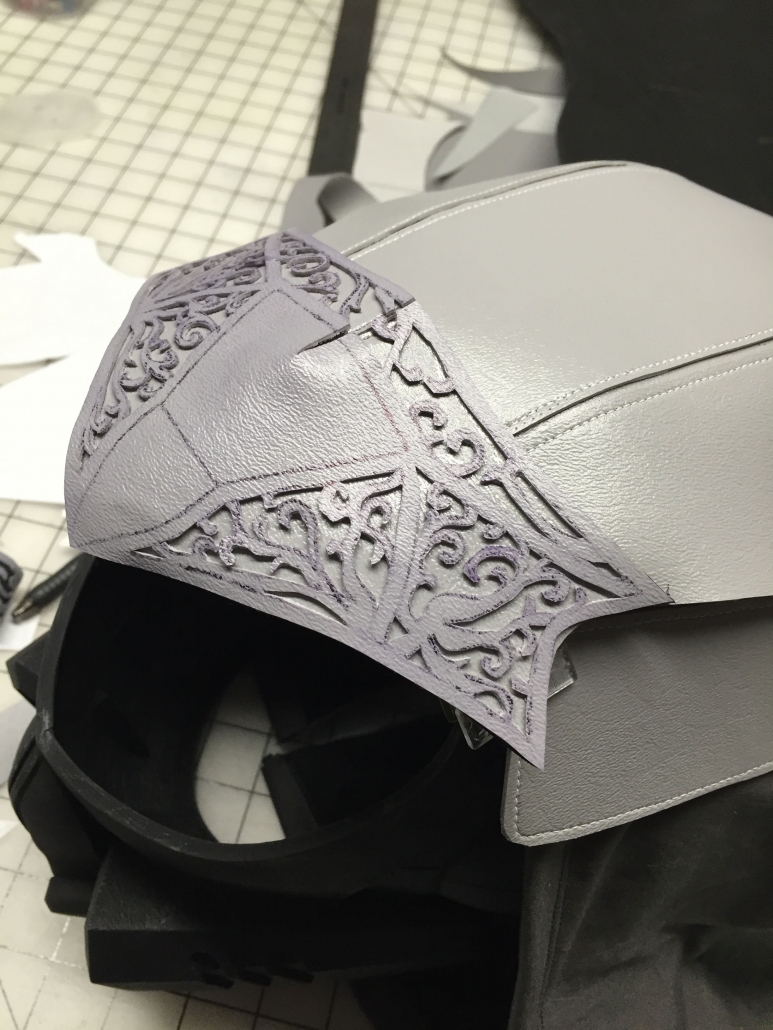 The large piece in the front that stands up was made with 2mm foam and 2mm polystyrene plastic. I freehanded patterns out of paper and transferred them to foam, then reinforced parts of the structure with plastic to make it more durable to stand up to some abuse and prevent total crushing. 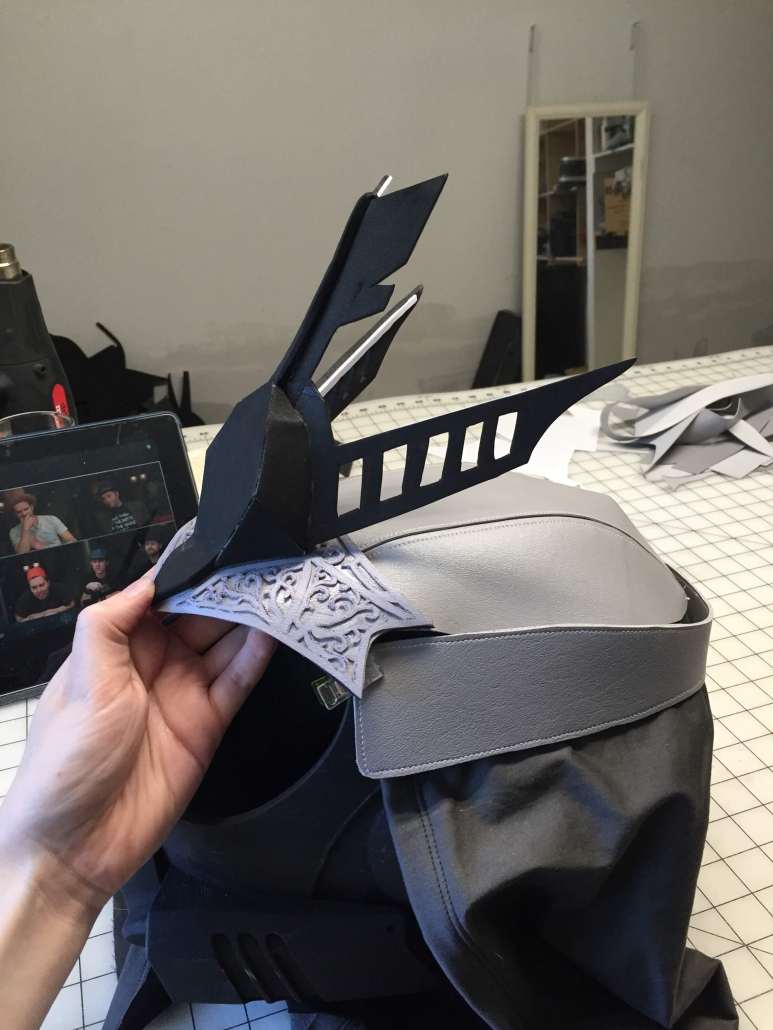 I got short, light grey hair wefts from Arda Wigs, and cut them to about 5 inches and gathered hair until I had enough to fit inside a 1” diameter circle. I just happened to have a mold for a bottle cap which I could test to see if the hair fit inside. I chose to mix a small amount of resin in this bottle cap mold and stuck the bottom of the hair in the resin so that the hair could be more secure and even have a bit of weight, and something to securely attach to the vinyl at the top of the hood. 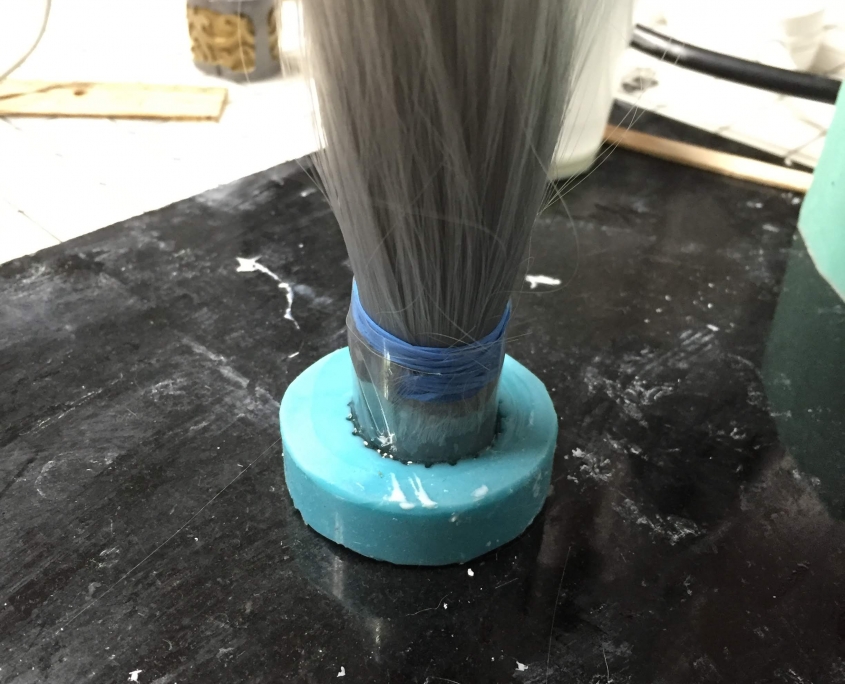 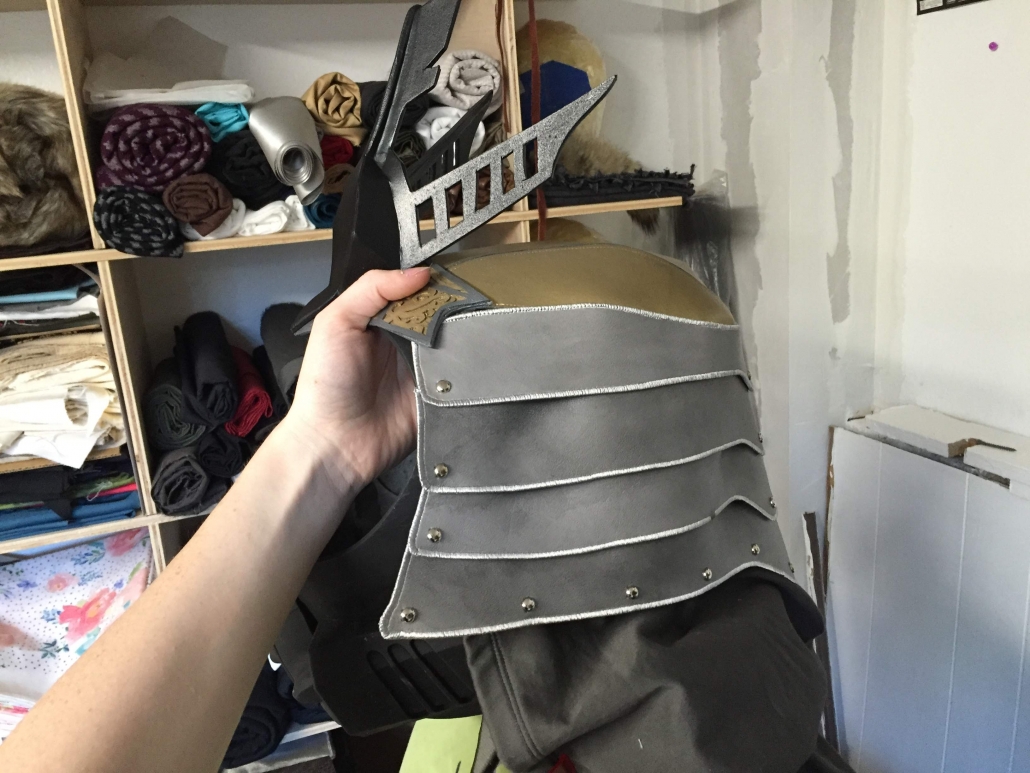 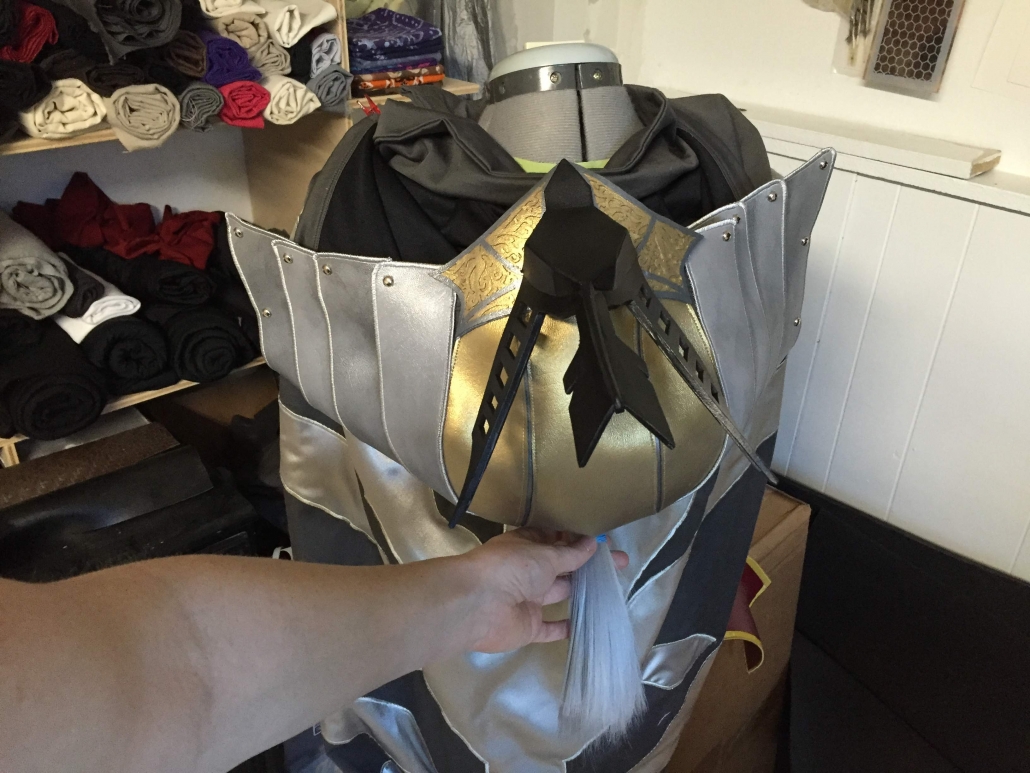 My client wanted the bottom of the cloak to be a little weathered without doing too much to the rest of it. So I cut the bottom hem of the cloak by roughly following the weathering on the in-game model, then went along the edge with Stop Fray, essentially a clear glue meant to prevent fraying. After the glue dried on both sides I weathered it with both black and dark brown, watered down acrylic paint. I both went over the bottom edge on the front and back to make sure that it was completely painted, then splattered paint upwards to the thickest drops of paint were at the bottom to form a gradient. 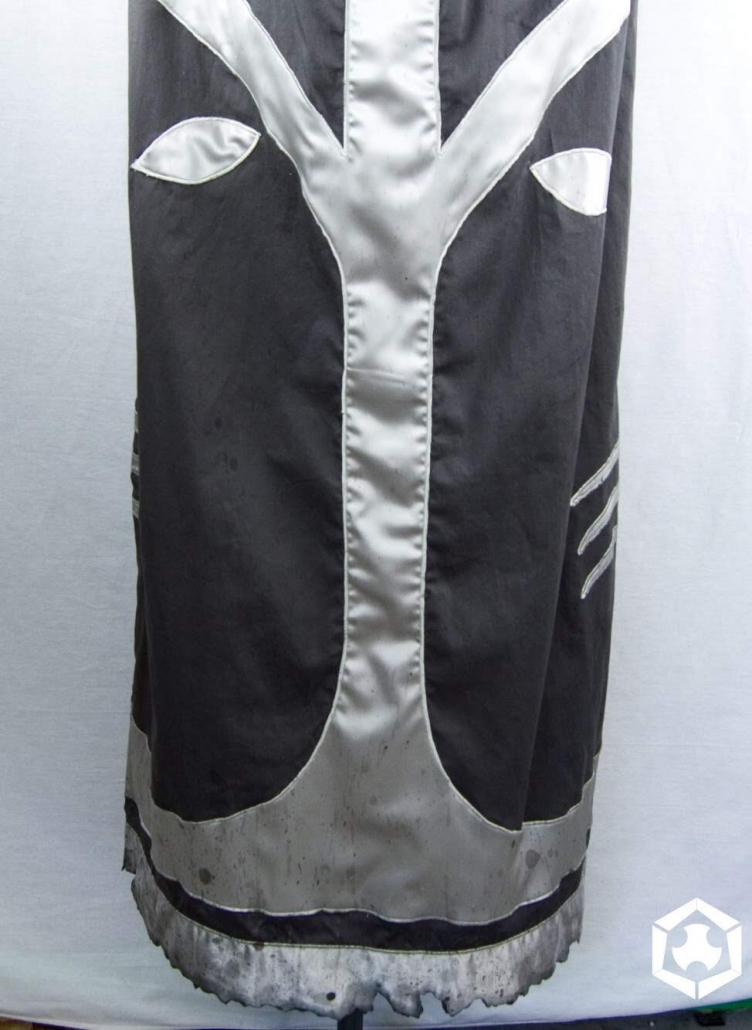 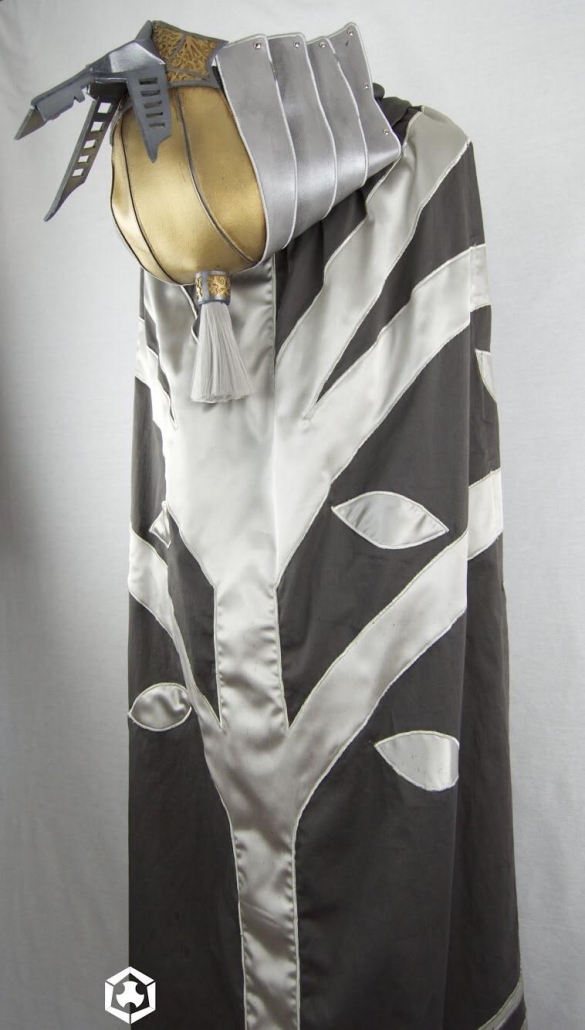 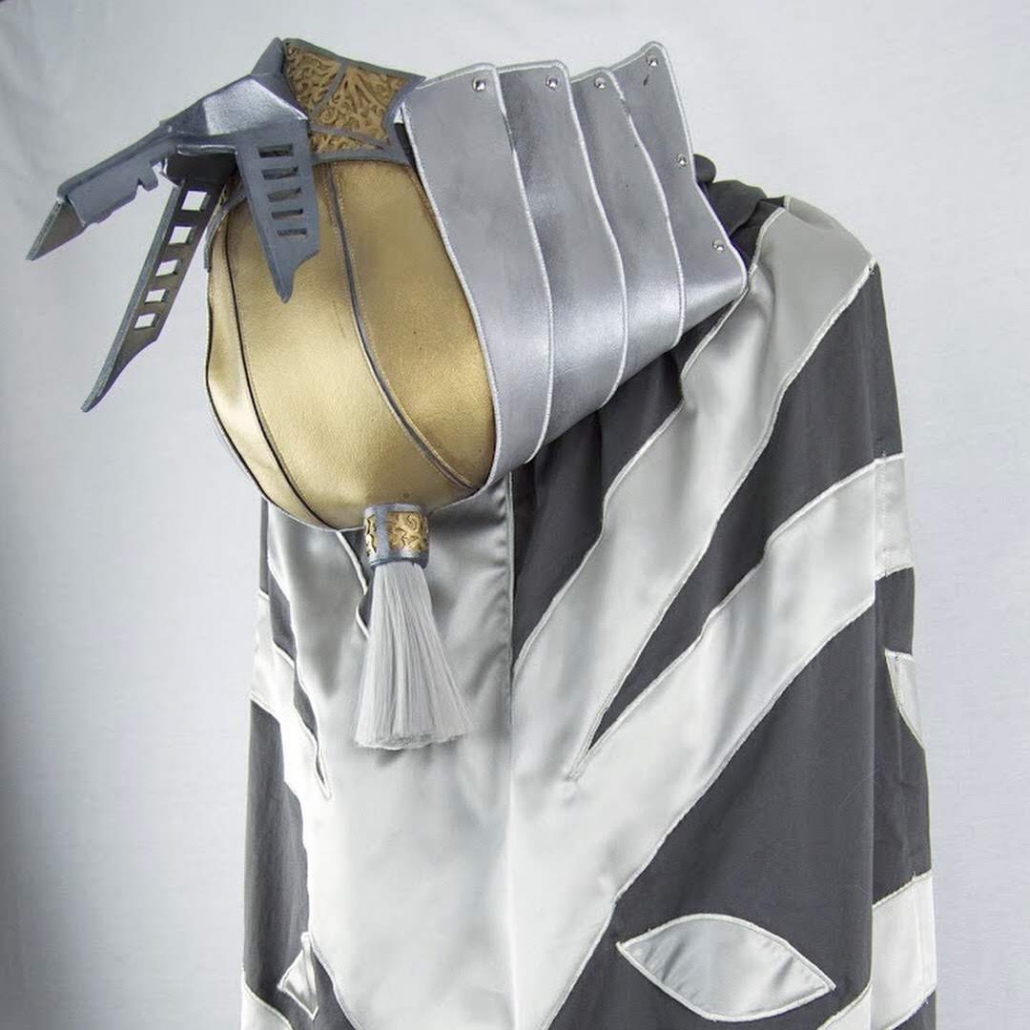 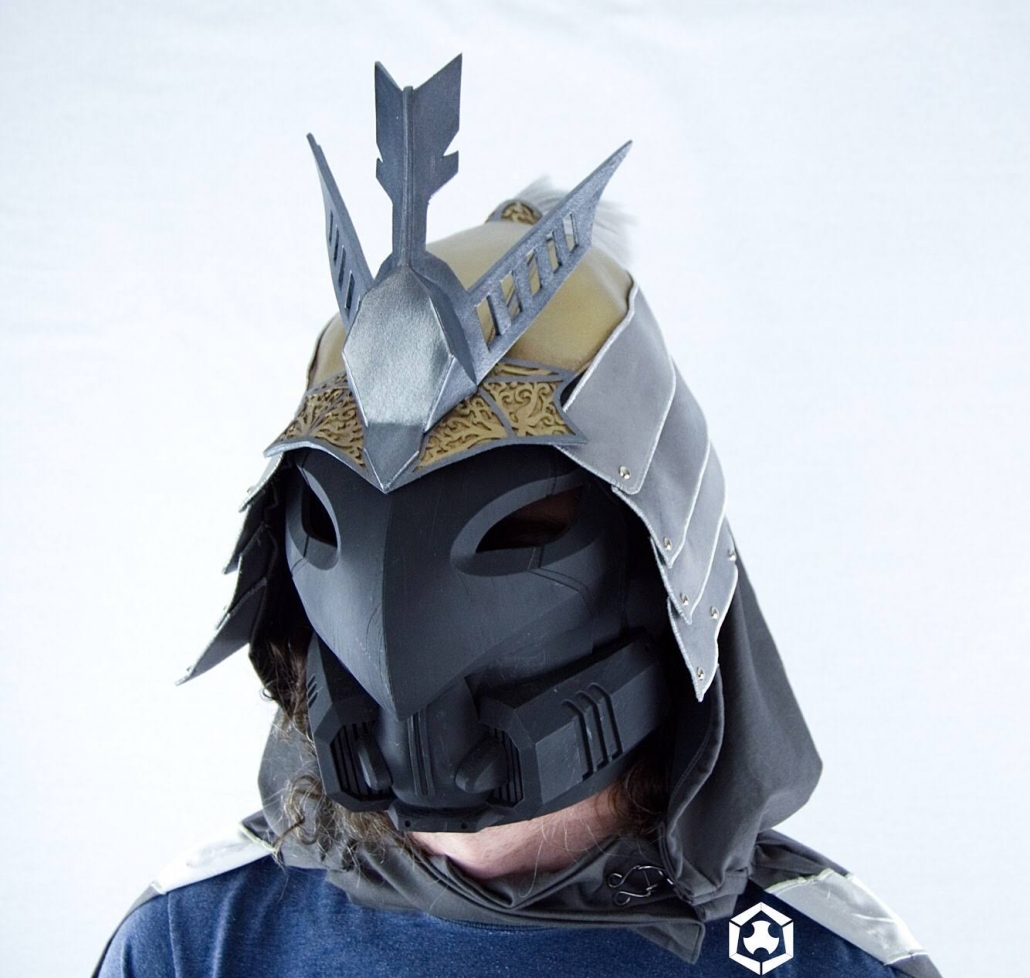 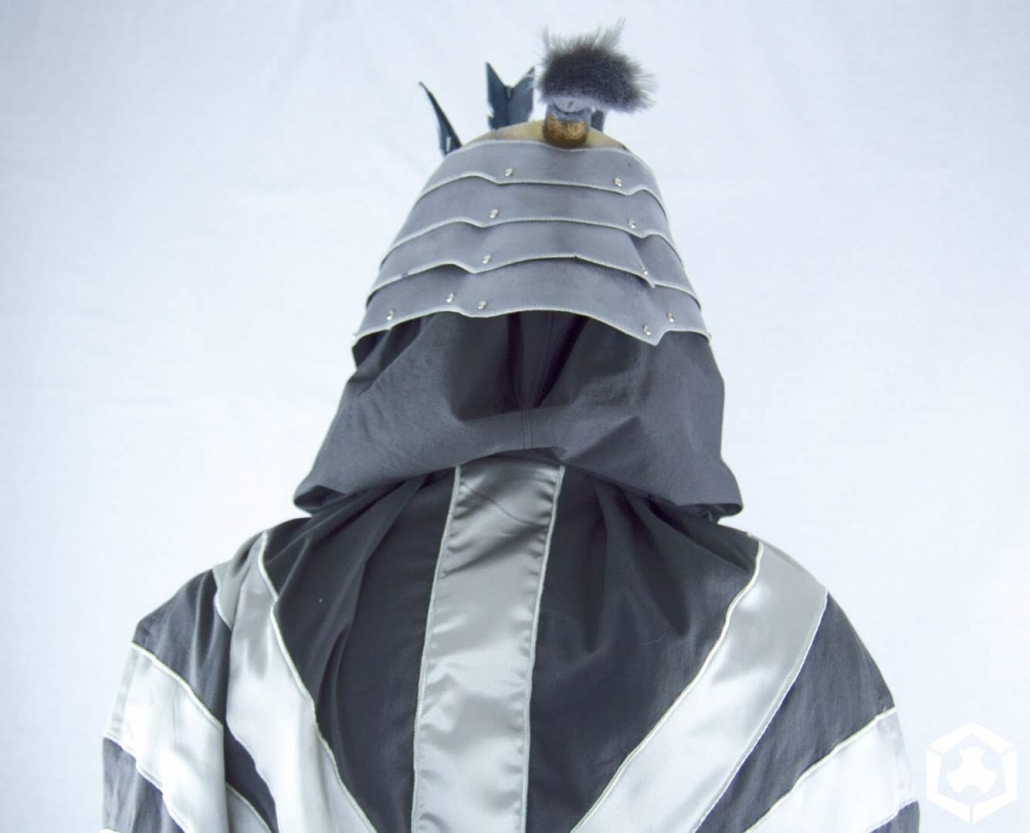 Crest of the Alpha Lupi | Destiny