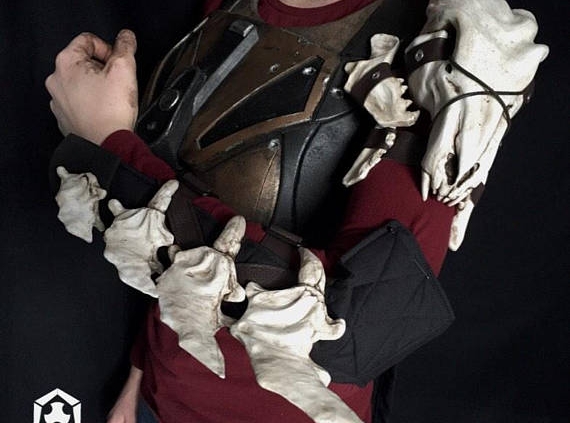 Young Ahamkara’s Spine was our first sculpting, molding, and casting project. We were working on Destiny cosplay, the first cosplay project that broke my rule of only making costumes from games I have played and liked. However Destiny fulfilled my desire to make armor, and feel more comfortable in cosplay.

This set included a skull, a pair of broken jaw pieces, and 4 spine pieces, none of which are in any way accurate bones of a creature on earth. Of course it’s not supposed to be from earth…but skeletons…anatomy…anyway… 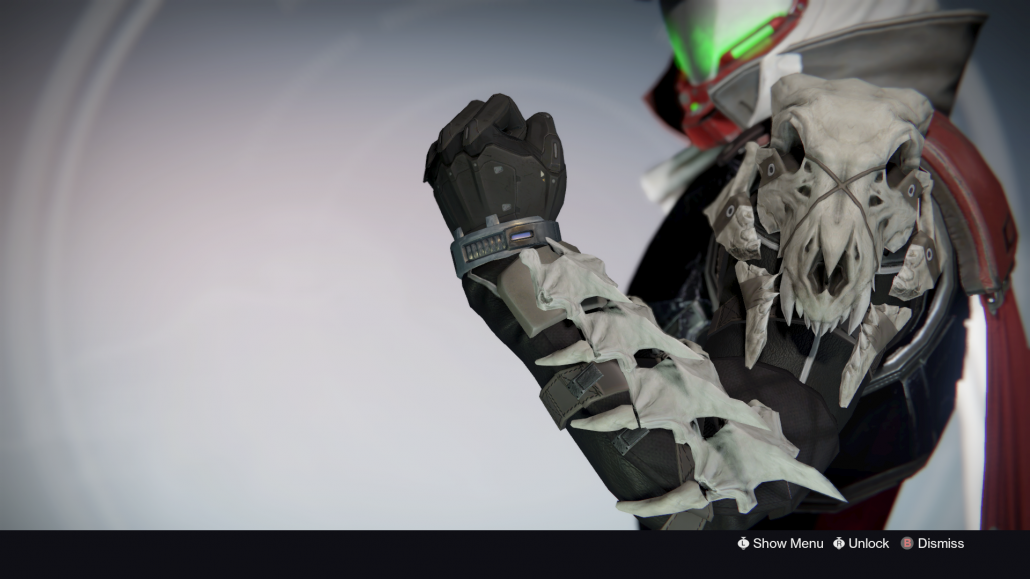 After looking for which pieces I wanted to make for the whole costume I settled on Young Ahamakara’s Spine for the gauntlet, I loved the design and saw its’ popularity in the community. It was also a piece that multiple people have made before, but I wanted to strive for a better quality piece.

We bought our first package of Monsterclay (which I’m still using years later), getting the medium hardness. Monsterclay is an oil/wax based clay, so it doesn’t dry out and it doesn’t need to be baked to hold it’s shape. It does have limits to holding its shape, more complicated sculpts need a skeleton of rigid material like nearly every clay, but for Ahamkara’s spine, this was not a problem.

This was my first sculpt since playing with clay as a kid and a beginners pottery class. The skull alone took months of work, only sculpting a couple hours approximately every other day. I used references from the Destiny armory and screenshots from the game, attempting to get an accurate piece based on the game. The skull is hilariously not like any real skull, but I accepted its’ derpiness and made it based on the game model. 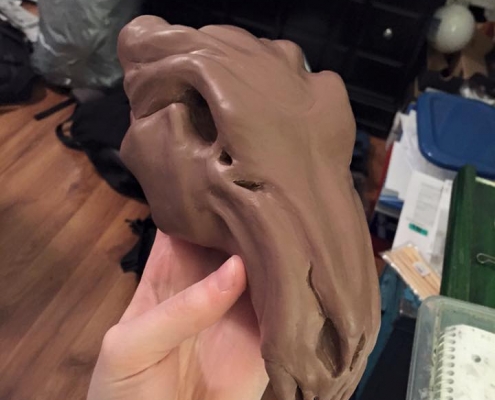 After all of the pieces were sculpted, we got a platinum-cure silicone rubber, Smooth-on’s Mold Star 15, and a urethane plastic, Smooth-Cast 300. Since then we have switched to using Mold Star 16 and Rebound 25 and Smooth-Cast 65D.
We made simple mold boxes around our pieces with cardboard, hot gluing them to a tile. We even did a simple box mold for the skull for the first try. This cardboard did not make great mold boxes because the silicone actually got in between the walls of the cardboard and we got bonus useless silicone strips. 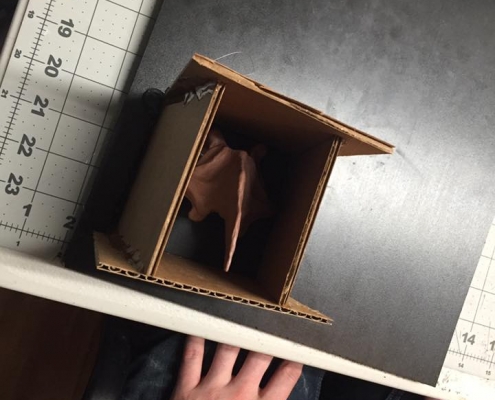 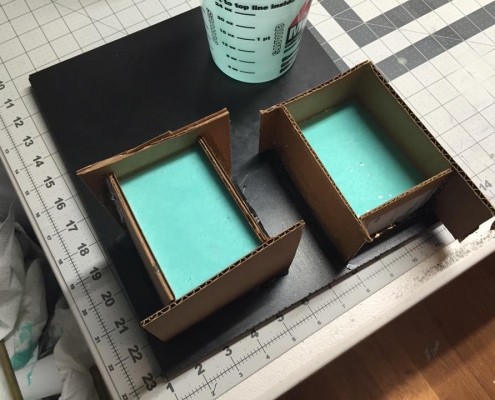 There were several problems with this method for the skull:
Our boxes were too large, we could have made boxes more fitting to all of the pieces to save silicone (and money).
This was literally the worst way to mold the skull. It used a TON of silicone and gave us a 3 lb skull! My clay skull was relatively thick in order to maintain its shape, and a block mold made it exactly that thickness.
The block molds for the spine and jaw pieces could continue to be used, but the skull mold was remade two more times. 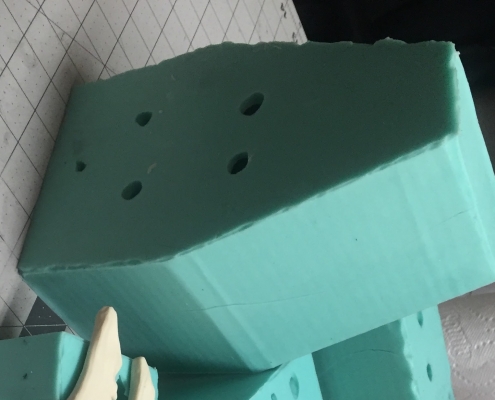 Skull mold 2 we made a two part brush on mold with a jacket made of fiberglass. We learned that the silicone did not need to be in 2 parts, it gave us a sad seam down the middle and Rock quickly decided that fiberglass sucks and although it has its uses, it wasn’t worth it for a jacket mold. 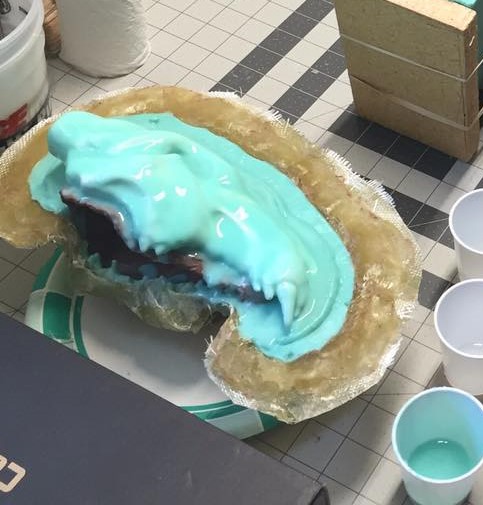 Skull mold 3, “Hank”, was another brush on mold, this time actually using Rebound 25 (the preferred silicone for brush on molds because of its’ thicker consistency), and for the two part jacket we used Free Form Air. Free Form Air is another expensive product from Smooth-On but because of its easy use and smooth finish it is our preferred material for making jackets. It’s 1:1 of parts A and B, mixed together by hand and worked with like play-dough, and cures to be hard as rock. We have made jackets as thin as .25 in thick, but may crack easily if you’re not careful. 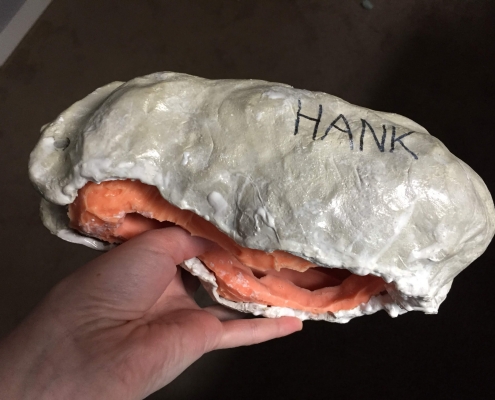 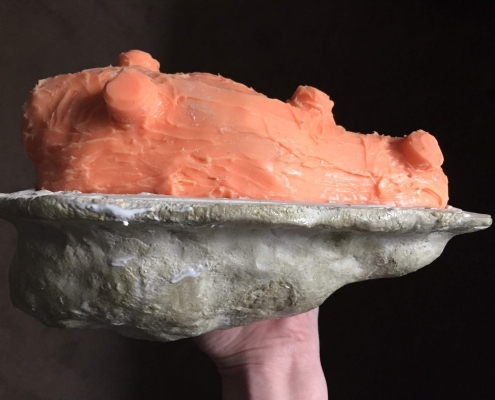 Rotocasting by hand with Smooth Cast 300 provided a skull that’s very light and much more comfortable to wear. We mix an ounce of resin, pour a bit into another mold, and the rest into the front teeth. We learned that air bubbles easily form at the tips of teeth and spikes so we then squeeze the silicone around the teeth to push out air bubbles then let that turn white and begin to cure before slush casting the rest of the skull, making sure to get plenty of resin around the edges. Mixing the resin several hours before is also helpful in avoiding bubbles here.

After the silicone on the first spine molds got worn out we made new molds in a similar fashion, brushing on silicone and making a two part jacket with Free Form Air.

Smooth Cast 300 provides us with a bright white, paint-able surface, we sand down any rough edges, any flashing, and cut out the eyes with a dremel tool, then paint with acrylics. My personal set was not cast with white resin except for the skull so mine are still painted much more heavily (and honestly more sloppy) than the sets we have made prior to that one. Since then we have switched to using Smooth-Cast 65D which is a semi-rigid plastic that is more friendly for rotocasting the skull, and is a little more impact resistant.

The fabric base for the spines was remade a few times until I determined the most accurate design. I used a layer of fleece in between two layers of cotton or broadcloth, quilted, with the forearm straps in between the layers. Velcro or snaps from this fabric base to the base shirt made it much easier to not have to adjust throughout the day, which I learned after having to saftey-pin this thing to my arm for three conventions.

The straps for the skull and jaw pieces were designed to match where they lay in the game, and like the spine base it took a few tries to perfect. There are two potentially adjustable straps and one strap that connects to the underside of the shoulder of the armor to once again make it easier to not have to adjust while wearing it. 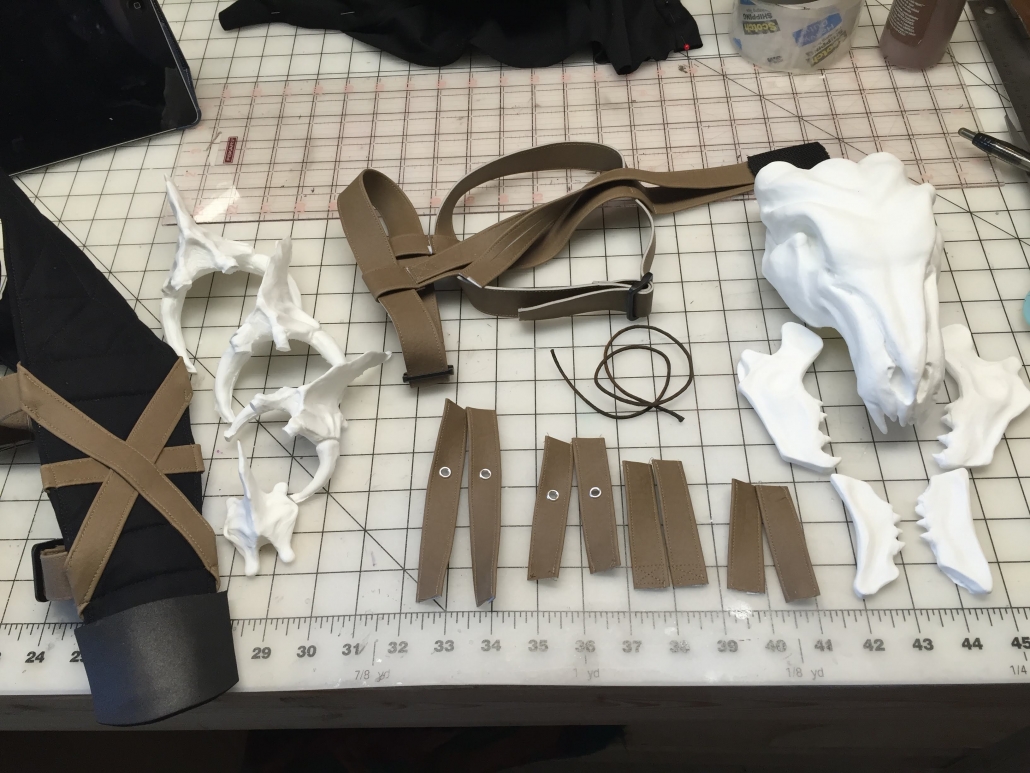